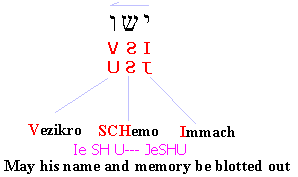 Yeshua in the Bible is a pagan term. Another explanation given is that the name "Yeshu" is actually an acronym for the formula (ימח שמו וזכרו(נו (Y'mach Sh'mo V'Zichro(no)) meaning "may his name and memory be obliterated". https://en.wikipedia.org/wiki/Yeshu

Yeshu ben Pandera was a man, a Jewish healer with amazing powers, and he was killed, stoned to death along his five disciples by Jewish religious authorities all by themselves, no Romans involved. Yeshu ben Pandera, translated "Jesus" by some, who was the teacher of Jacob of Sichnin in the 2nd century AD. Yeshu gathered to him many followers for a time, and practiced various Kabbalistic methods as well as Egyptian magic.

Shua in Yahushua or Yeshua H7768 is a feminine passive term that means to scream or cry out. H7723 actually means evil or wicked.