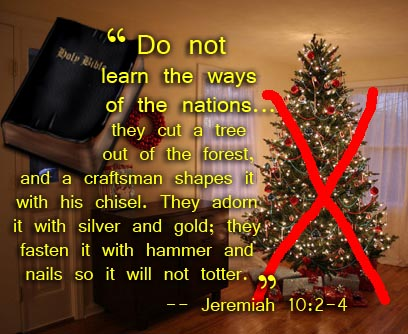 The Messiah Birthday, Christmas has been shifted to a satanic winter solstice of Saturnalia, with Black Friday being shifted in slowly, year by year they are turning white into black.

Natalis Solis Invicti ("Unconquered Sun") was the official sun god of the later Roman Empire, this is which the Catholic Church instituted as Christmas.

December 25th is the birth date of Tammuz, the Babylonian sun god or the Egyptian sun god Ra! That is whom you are celebrating on Christmas!

Sukkot, the true time of the birth of Yâsha' the Messiah. Sukkot, also known as the Feast of Tabernacles, is a Hebrew holiday that lasts for 7 days and takes place during the Fall. It is at this time that Yâsha' the Messiah was born, contrary to the belief that He was born on December 25th. There is no Scriptural authority to claim that our Messiah was born on December 25th. In fact most Biblical Scholars agree that He was not born in December at all.

Lets see the facts which indicate that Yâsha' was born during Sukkot, on the Fall: When Yâsha' was born the shepherds were at watch in their fields (Luke 2:8) which could not have been in the Winter. In Israel, temperatures in the night at winter can be as low as 0°C. The Scriptures mentions that Bethlehem was "booked solid". This would not have been due to the census which would have taken place over the period of a year. Every Hebrew was required to come to Yerushalayim (Jerusalem) for Sukkot (Deuteronomy 16:16) this would have over run Yerushalayim (Jerusalem) as well as Bethlehem just five miles away. Yâsha' was born in a stable. The Hebrew word for "stable" is "sukkah" (as in Genesis 33:17) so it is likely that  Yâsha' was born in a Sukkah/booth. Sukkot is symbolic of God dwelling in a "tabernacle" (body) with us. The Name Amanuil, meaning "Ahâyâh with us", was also given to Yâsha' in fulfillment of Isaiah 7:14 as stated in Matthew 1:2-3. Now in Matthew 2:7-8, Herod kills all the children two and under. The fact that he killed such a wide range indicates that he did not know quite how long ago Messiah had been born. YASHA's parents fled to Mitsrayim (Egypt) until they heard Herod was dead. They were back in Bethlehem in time to perform Maryam purification and YASHA's dedication on the 40th day after YASHA's birth (as required by Torah) (Luke 2:22-38). (as it is written in the Torah Law of Ahâyâh, "every firstborn male is to be consecrated to Ahâyâh" and to offer a sacrifice in keeping with what is said in the Torah Law of Ahâyâh: "a pair of doves or two young pigeons." By this time Herod had to be dead or they could not have come to the Temple in Yerushalayim (Jerusalem). Herod had to have died during the 40 days between YASHA's birth, and his dedication 40 days later. Herod is known to have died sometime in the fall of 4 B.C.E So Yâsha' had to have been born in the fall and this also indicates that Yâsha' was born in 4 BCE. The Feast of Sukkot was a time of rejoicing for the Hebrew people. We read in Deut 16:13-14 that the key aspect of the Feast was rejoicing in AHAYAH. The impact of the Feast upon the Israelites was so significant that the feast of Tabernacles came to be known as the "Feast of Ahâyâh" or more simply "The Feast." Sukkot is known as "The season of our rejoicing", also "the season of our Joy", a fitting time AHAYAH would choose for His Son to be born in the world. And a fitting time for all to rejoice in the Salvation that AHAYAH has given us through HIS SON. Psalm 35:9 Then my soul will rejoice in Ahâyâh and delight in his salvation. When the angels appeared to the shepherds they said "Behold, we have come to declare to you glad tidings of great joy." (Luke 2:10-11). This statement closely echos the ancient Sukkot liturgy. In the Scriptures, the Prophet Zechariah spoke a significant Prophecy concerning Sukkot / The Feast of Tabernacles. In the end of days, and after the time of Jacob's trouble, the Great Tribulation, Israel and all the other nations will be commanded to come to Yerushalayim (Jerusalem) to celebrate Sukkot / The Feast of Tabernacles (Zechariah 14:16). Zechariah's prophecy proves that AHAYAH has not done away with this Hebrew Feast and that it still stands, no matter what manmade doctrines say about the Hebrew Feasts. Sukkot is truly an anointed Feast of Great Importance to AHAYAH, and evidence points to this time as the time of YASHA's true time of birth.

According to Old Testament prophecy, Zacharias 14:16; combining, too, the fact of Christ's death in Nisan with Daniel's prophecy of a three and one- half years' ministry (9:27), the birth of Jesus occurs during Tisri, September/ October

Using the chronology in the gospel of Luke, it is quite clear that Messiah was born during the Feast of Tabernacles (Booths) called "Sukkot", during the Jewish month of Tishri, October...

The Two Babylons or Papal Worship provided to be the Worship of Nimrod and his wife by Alexander Hislop, Chapter III Festivals Section 1. Christmas and Lady Day pg. 57-61

While this book has the wrong holy names, it does have a good summary on Christmas and other topics.

Vain Traditions Paganism and the roots of Christianity pg. 39-44 www.vaintraditions.com 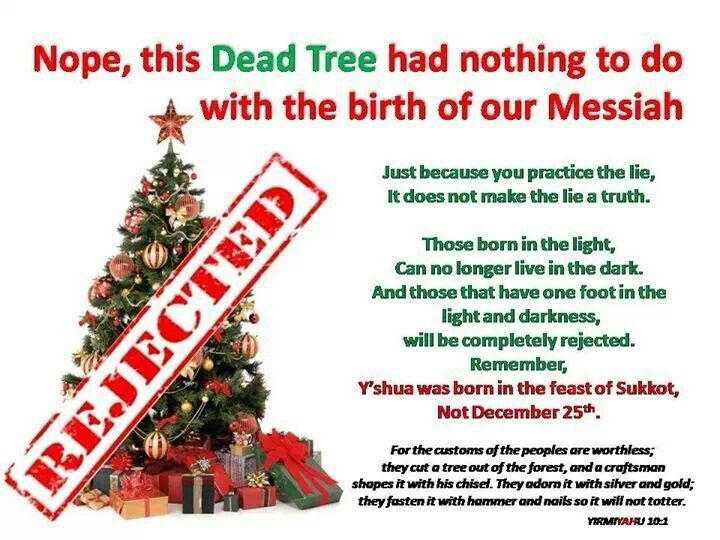