This passage says the Mashi'aH was hung on a cross or Tav and not a stake or gallow.

Nails! That is more than 1 nail hanging someone. You would use only one nail on a torture stake/gallow to fasten your hands. You would use two nails on the hands-on a CROSS + or Tav t, one for each side.

A cross or a Tav t, I believe the Mashi'aH hanged to death on, because a Tav t means an ending! The pictographic ancient Hebrew Tav t is a + shape. I know that the cross symbol is pagan in origin and that we probably shouldn't be using a cross, as so many Christians and Pagans do as it is the murder weapon. Many other Qadash (Holy) name Bibles use a stake or gallow or torture stake, the YASAT still uses the cross from the Aleph Tav 𐤀𐤕. Why worship the murder weapon, when the Mashi'aH is alive in Heaven?

Ancient Rabbis knew the 22nd letter of the Hebrew alphabet, Tav (ת)(t)or (+), symbolized the cross. It was the "mark" placed upon Cain to protect him. The Hebrew word for "mark" is "Owt" and is spelled (אות). Notice the letter Tav in the word "Owt"? In essence, the mark was a cross that protected Cain.

That "mark" is also another message, it is the Tav or the Mashi'aH joined (Vav - ו) to the Father, the Alef (א) of A'HâYâH that is the "mark." The example above is a beautiful illustration of how one comes to the Father through the Mashi'aH.

When the letter Tav (ת) is affixed to the Hebrew word for sin, Chatah (חטא), the word becomes "sin offering," Chaat'at (חטאת). The cross symbolizes Yasha HaMashiach. It is Yasha, who is the Tav, nailed to "sin" that became the "sin offering." See how amazing Hebrew word-pictures are in conveying and solidifying Biblical truths?

It is also no coincidence that Psalm 22 speaks about Mashi'aH being pierced and nailed, pointing to the letter Tav (22) at the cross. Are you beginning to see things poetically? symbolically?:

16 For dogs have surrounded Me; The congregation of the wicked has enclosed Me. They pierced My hands and My feet; 17 I can count all My bones. The look and stare at Me. 18 They divide My garments among them, And for My clothing they cast lots.

Biblically the metal brass symbolizes Father's judgement and deliverance from sin. The Mashi'aH's feet, in Revelation, is described as "brass glowing." This is the event where He comes to judge as well as deliver. Contained on the brazen alter used in the temple for sin offerings is Brass/bronze material, for this altar's purpose that was to judge and remove sin.

Recall the brass serpent in the wilderness during the Exodus of Moses in Numbers 21:8-9. The brass serpent helped heal all those who looked upon it, but King Hezekiah destroyed the idol for unto those days the children of Israel did burn incense to it, and it was called Nehushtan. Let's take a look at the Hebrew word-picture. The Hebrew word for serpent is "nachash" (נחש). Adding a Tav to the end of this word spells "nachashet" (נחשת) which means brass. The serpent becomes brass when the cross or Tav is attached to it. That is, the cross forms the metal that symbolizes judgment and deliverance. Israelites that looked at the brass serpent became immediately healed from the plague. We are delivered from judgment, "it is finished, " when looking at Yasha HaMachiach as our Savior. Yasha means Savior in Hebrew too H3467.

There are many pagan crosses out there. My x-wife had a Rosicrucian flowery pagan cross in my house, which I took down shortly after she left as I was learning it was pagan.

The symbol of the Babylonian God Tammuz is the shape of the two-beamed cross and had its origin in ancient Chaldea. In the third century A.D., pagans were received into the apostate ecclesiastical system and were mainly permitted to retain their pagan signs and symbols.

Roman Constantine's grand vision of "the cross superimposed on the sun" in A.D. 312 is the most accepted reason for the "cross" used in Christian worship. What he saw is nowhere to be found in Scripture. Even after his so-called "conversion," his coins showed an even-armed cross as a symbol for the sun-God. Many scholars have doubted the "conversion" of Constantine because of the wicked deeds that he did afterward.

After Constantine had the "vision of the cross," he promoted another variety of the cross, the Chi-Rho or Labarum. The new cross represents Christos' first letters (C.H. and R, or, in Greek, X and P). The identical symbols were found as inscriptions on rock, dating from ca. 2500 B.C., being interpreted as "a combination of the two Sun-symbols." The identical logo is on a Ptolemaeus III coin from 247-222 B.C, which is more proof of its pagan origin.

According to An Illustrated Encyclopedia of Traditional Symbols, the labarum was also an emblem of the Chaldean sky-God. Emperor Constantine adopted the labarum as the imperial ensign. According to the Dictionary of Mythology Folklore and Symbols, the symbol was in use long before Christianity. Chi probably stood for Great Fire or Sun. Rho probably stood for Pater or Patah (Father). The word labarum yields "everlasting Father Sun."

CROSS WITH A ROSE IN THE CENTER

Is a rosicrucian cross and should be avoided.

Rosicrucian teachings are a combination of occultism and other religious beliefs and practices, including Hermeticism, Jewish mysticism, and Christian gnosticism. The central feature of Rosicrucianism is the belief that its members possess secret wisdom that was handed down to them from ancient times.

Cross is not pagan! 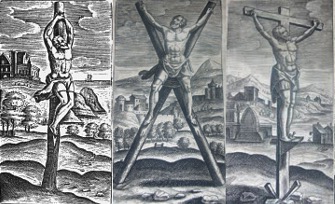