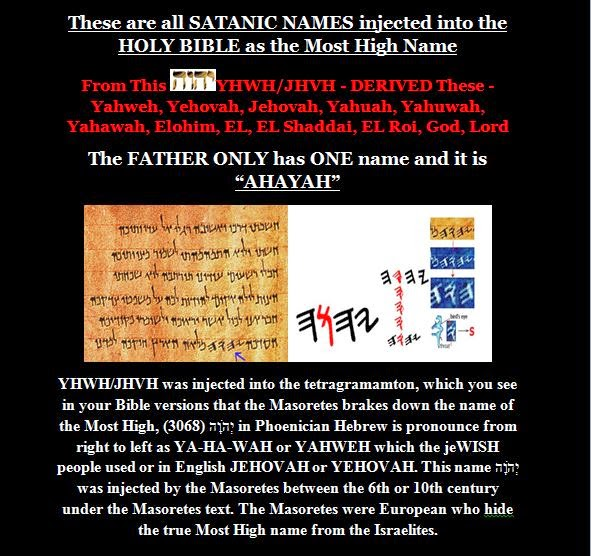 Did you know that YaHWeH is REALLY the Greek deity Zeus and the Roman deity Jupiter? The chief god of the Ancient Romans is known to us today as Jupiter, King of the Gods, but Jupiter has an older more ancient name. In English it is Jove and in classical Latin it is spelled IOVE and pronounced YaHWeH. If we check a pronunciation chart of classical Latin in a book called Vox Latina, which is one of the most respected and authoritative books on the pronunciation of classical Latin, this is what we find:

The “I” is pronounced as a double “EE” sound as in the word sheep.

The “O” is pronounced as a “AH” sound as in the word father.

Baal (/ˈbeɪəl/),[41][n 4] properly Baʿal,[n 5] meant "owner" and, by extension, "lord",[46] "master", and "husband" in Hebrew and the other Northwest Semitic languages.[47][48] In some early contexts and theophoric names, it and Baali (/ˈbeɪəlaɪ/; "My Lord") were treated as synonyms of Adon and Adonai.[49] After the time of Solomon[50] and particularly after Jezebel's attempt to promote the worship of the Lord of Tyre Melqart,[49] however, the name became particularly associated with the Canaanite storm god Baʿal Haddu and was gradually avoided as a title for Yahweh.[50] Several names that included it were rewritten as bosheth ("shame").[51] The prophet Hosea in particular reproached the Israelites for continuing to use the term:[52] https://en.wikipedia.org/wiki/Names_of_God_in_Judaism

Hosea 2:16 (YABS) And it shall be at that day, saith Ahâyâh, that thou shalt call me Ishi; and shalt call me no more Baali. H1180 NAS Exhaustive Concordance pg.1500 "my Baal," a symbolic name for Yah:-Baali. Both Baʿal and El were associated with the bull in Ugaritic texts https://en.wikipedia.org/wiki/Baal The Jewish encyclopedia ("Adonai and Ba'al") reveals: "The name Ba'al (בַּעַל), apparently as an equivalent for Yhwh." http://www.jewishencyclopedia.com/articles/11305-names-of-god#anchor6 Since the days of Jeremiah, the Jews have forgotten their god's name and replaced it with the title "Baal" or "YHWH/YHVH": The lying prophets "Which think to cause my people to forget my [God's] name...as their father have forgotten my name for Baal." (Jeremiah 23:27) 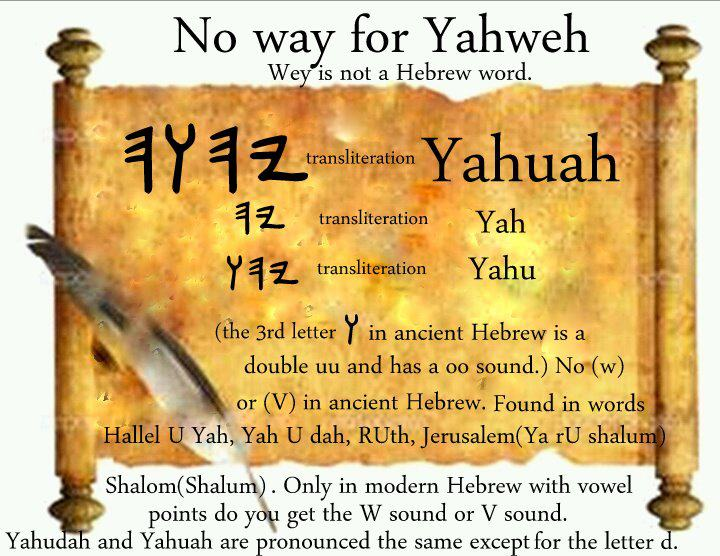 There Is No Letter "W" In old english, so His name cannot be YahWeh.

The American Peoples Ency. 1-649 reads: "The "W" added in the Middle Ages . . . to create the new character "W". The origin of the "W" was indicated by its English name of "double U" or its French name of "double ve."

So Yahweh, is actually YahUUeh or Yahvveh. You need to beware of the letter W or two V's When carving a letter U in stone, they often made a V because it was easier.

So Yahweh, was actually Yahvveh Two U's or V's you need to beware of!

YHWH is actually YHvvH, remember Hebrew has no vowels. which is YHavvah or destruction! YHWH/YHVH is actually the tetragrammaton name of Baal. Even the Encyclopedia Britannica 1958 edition, Volume 12, page 996 says "...Yahweh is not a Hebrew name". Any god that is NOT the original Hebrew god is a false god. YAHWEH is NOT a HEBREW NAME. It is ARAMAIC, which is closely related to HEBREW. (sources: Ency. Brit. 1958.Ed Vol 12, p. 988, Ency. Brit 1958 Ed. Vol. 12, p.995-p.996, Chronographia, Paris, 1567 (ed. Paris, 1600, p.79 seq.) ARAMAIC is THE BABYLONIAL LANGUAGE that the JEWS adopted when they went to BABYLON around 606BC and translated it from PALEO HEBREW Scriptures to ARAMAIC tongue refer to as CHALDEON (CHALD). Two Catholic monks invented the guess names of JEHOVAH (1270AD) and YAHWEH (about 1725AD). They should not be in any Bible since they did not exist at the time the Bible was written.(Sources: Ency. Brit. 1958.Ed Vol 12, p. 988, Ency. Brit 1958 Ed. Vol. 12, p.995-p.996, Chronographia, Paris, 1567 (ed. Paris, 1600, p.79 seq.) According to Albert Pike, a 33rd Degree Mason in his book Morals and Dogma, he stated the true name of Satan, the Kabalists say, is that of Yahveh (Yahweh) reversed; for Satan is not a black god, but the negation of God. The Devil is the personification of Atheism or Idolatry. There is absolutely NO PROOF that the Tetragrammatons’ was ever in the text of Scriptures prior to the Babylonian captivity and up to the time of Malachi. When Israel was taken away into Assyria, Babylon & Egypt, they adapted to many Babylonian customs, traditions, religious beliefs and use of words. Real Israelites were in captivity so the Masorites injected their god into the Bible. (Hebrew: יהוה) The Tetragrammaton or unpronounceable name found in a satanic pentagram. Often translated as Yahweh. 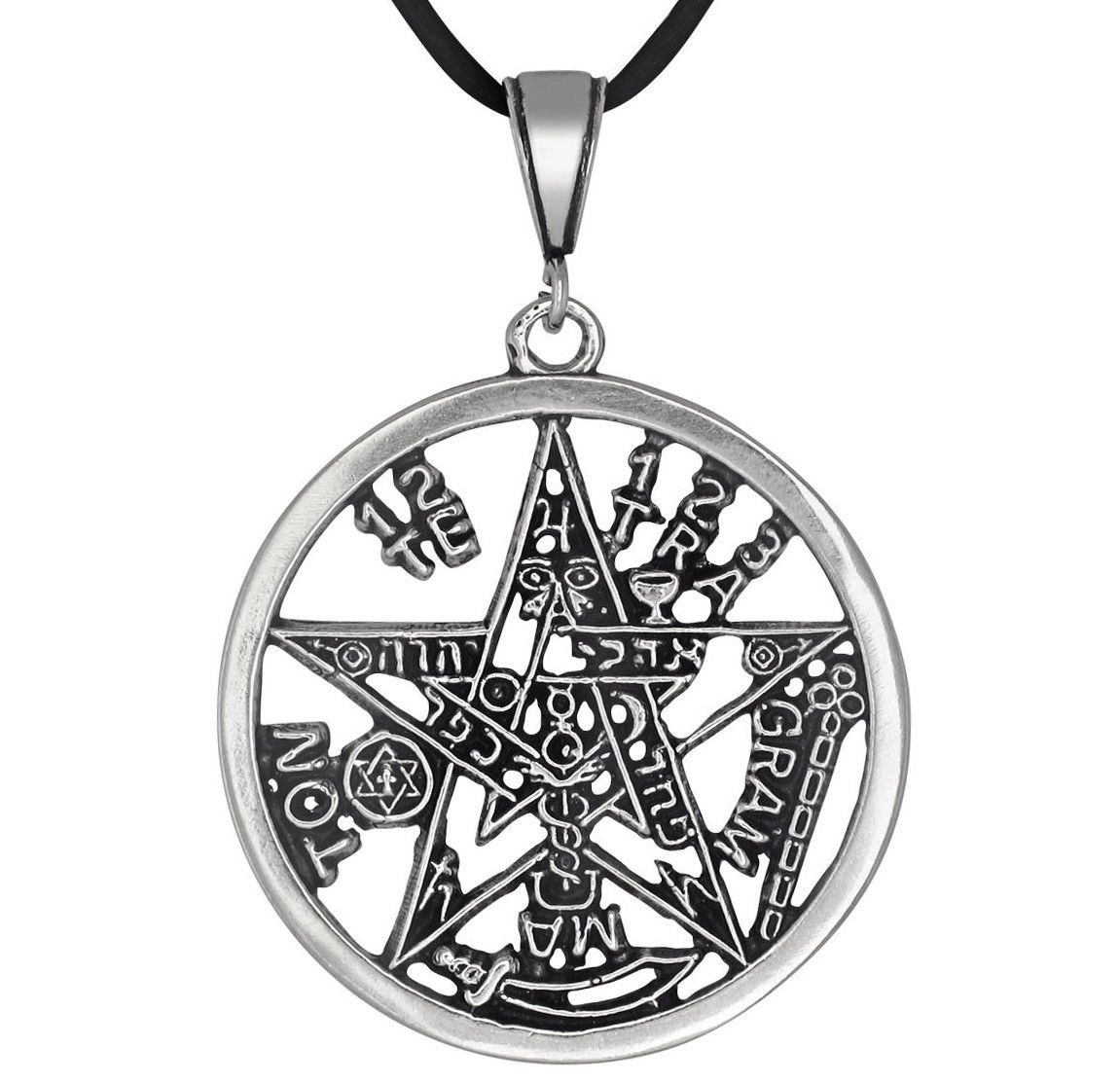