The Whole World is Deceived Rev 12:9

The whole world has been deceived! Revelation 12:9
You are praying to the wrong pagan gods! You are reading from a corrupted Bible.
GOD is the common Teutonic word for a personal object of religious worship, applied to all the superhuman beings of the heathen mythologies!

Jeremiah 23:26 (YABS) How long shall this be in the heart of the prophets that prophesy lies? yea, they are prophets of the deceit of their own heart;
Jeremiah 23:27 (YABS) Which think to cause my people to forget my name by their dreams which they tell every man to his neighbour, as their fathers have forgotten my name for Baal.

The Holy Bible was purposely inserted with the various names of Baal: The BULL.

Ezekiel 48:11 (YABS) It shall be for the priests that are sanctified of the sons of Zadok; which have kept my charge, which went not astray when the children of Israel went astray, as the Levites went astray.

If you see old documents or ancient artifacts that show YHWH the Tetragrammaton or other names of Baal used, its because even the Children of Israel and the Levites went Astray and worshipped pagan gods! That is why the Bible is filled with Pagan Gods, its very important to be reading a sacred name Bible with Ahayah in it.

Matthew 4:4 (YABS) But he (Yasha) answered and said, it is written, Man shall not live by bread alone, but by every word that proceeded out of the mouth of AHAYAH.

Every word of the scriptures are important, thats why you want an Antioch Bible over an Alexandrian one. You want to read clean scriptures, not filled with pagan names.

John 14:13 (YABS) And whatsoever ye shall ask in MY NAME, that I will do, that the Father may be glorified in the Son.

His Fathers name is AHAYAH and His Son's name is YASHA! Reading a Bible with His Holy Names, will help in prayer!

Exodus 3:14 And Ishi-ohim said unto Moses, Ahâyâh Asher Ahâyâh (I AM THAT I AM): and He said, Thus shalt thou say unto the children of Israel, Ahâyâh (I AM) hath sent me unto you.*1*
*1*This is the first case when Ishi-ohim tells us His Holy Name Ahâyâh. hâyâh stands for "To Be!" or "Be!" In Hebrew אהיה is Ahâyâh

Here for the very first time is a literal translation of the scriptures with the sacred name of Ahayah and Yashayah, restored and preserved. Did you know in every bible translation including the King James Bible that our Heavenly Father's personal name Ahayah has been taken out and replaced with titles and even names of pagan deities more than 10,000 times?
Churches preach trinity, which is not found in the Bible, but the echad which is united oneness, Deuteronomy 6:4 is found in the Bible and it's restored in here. Many think Yahweh is the Holy Name, but Exodus 3:14 clearly shows in Hebrew that His Holy Name is Ahayah. The Yasha Ahayah Bible Scriptures (YABS) Study Bible is designed for those looking to read the word as it was meant to be. Giving glory to Ahayah and not pagan gods. This scripture also replaces "Law" with "Torah Law," as the law was given to Moses on the temple mount and many confuse the law with the laws found in society.

The Yâsha' Ahâyâh Bible Scriptures (YABS) is an english version following the 1769 King James Bible (KJV), but removes pagan terms and restores the Holy name of Ahayah and Yasha.

Accept Cookies help us deliver our services. By using our services, you agree to our use of cookies.
$0.00

The Yasha Ahayah Bible Scriptures Aleph Tav (YASAT) coming out of Babylon is an English version following the Antioch (Protestant) WORD of the 1769 King James Bible (KJV), the Textus Receptus, Peshitta and the Jewish Aleppo Codex. This scripture restores the NAME of the Messiah Yasha taken from the Oldest Greek NT, the Codex Sinaticus uses the "nomina sacra" (Iota Sigma), which is YASHA in ancient Paleo Hebrew. Twenty-one other Alexandrian Papyrus parchment fragments from 300AD or before also confirm this. This scripture research uses both Antioch (Protestant/Jewish) TEXT "WORD" and Alexandrian (Catholic) "NAME" line for the Messiah. In medieval times the Jews who rejected the Messiah called His name Yeshu harasha or Yeshu rasha with Yeshu being an acronym for the formula "may his name and memory be obliterated" (see Toledot Yeshu). This is very close to Yasha which means Saviour in Hebrew. Here for the very first time is a literal translation of the scriptures with the sacred name of Ahayah and Yasha, restored and preserved. Did you know in every Bible translation including the KJV that our Heavenly Father's personal name Ahayah has been taken out and replaced with titles and even names of pagan deities more than 10,000 times? The YASAT is designed for those looking to read the word as it was meant to be, by coming out of Babylon which worshipped foreign Gods. Giving glory to Ahayah and Yasha and not pagan gods, like Lord, God, Elohim, EL, Jehovah and Jesus to name a few. This scripture also replaces "Law" with "Torah Law," as the law was given to Moses on the temple mount and many confuse the LAW with the pagan laws found in society. At the time of this second publishing, I have restored the Paleo Hebrew pictographic names. I have restored the Aleph Tav in the Torah and part of the Tanakh. The Messiah calls himself the Aleph and Tav in Revelation 1:8 in the Messianic Peshitta and it's restored here. I have also restored the original Mark of the Beast as found in Revelation 13:18. Ahlahayam is now used instead of the pagan Elohim or Ishi-ohim, Adana is used instead of Adonai (Adonis). Ah-Yasha is used instead of Ishi Hosea 2:16 which was taken straight from Paleo Hebrew and is another solid example of how the Father has the SAME NAME as the Son "YASHA" fulfilling John 5:43. Many common terms used in most Bibles today have pagan origins, so I have done research into cleaner terms to use and have documented them at the back of this book as well as on my website ahayah.com under "PAGAN TERMS" to help fulfill Exodus 23:13.

About the Author Timothy Sorsdahl's background is a civil engineer, artist and inventor. Eight years ago he became interested in finding the truth to the trinity, and he couldn't find it in the Scriptures. But he found the echad, in Paleo Hebrew is the Ahcad which is united oneness, Deuteronomy 6:4 and it is restored here. Trinity was invented by a man named Tertullian who wrote Liber De Palio and so there is no life from following it. From there he did research looking for His Holy Name. Timothy thought it was Yahweh (YHWH), but Exodus 3:14 clearly shows in Hebrew that His Holy Name is Ahayah (AHYH). The YASAT is designed for those looking to read the word as it was meant to be. Giving glory to Ahayah and not pagan gods. So he felt called to make a version of the Scriptures that has Ahayah the Father, Yasha the Son, Yashayah (Our Saviour), who both share the SAME NAME "HAYAH" fulfilling John 5:43. The YASAT Study Bible helps to open a door into the Messianic roots of the faith and the cleaner Scriptures will help in prayer and getting saved. Both the Father and Son say you need to know and call out their proper names Acts 4:12, Romans 10:9 and Romans 10:13. 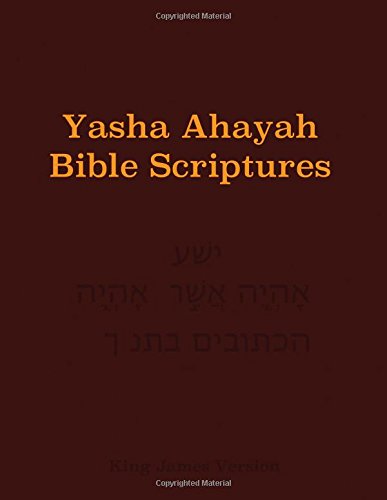 Only the Official Website of the Yasha Ahayah Bible Scriptures (YABS) offers a free* searchable digital PDF for buying our Bible.
*(worth $20)

You can start reading the Bible as it was meant to be right away and use the computer file for quickly finding and sending Bible "quotes" out.

Acts 4:12 Neither is there salvation in any other: for there is none other name under heaven given among men, whereby we must be saved.

It is important to be praying to the REAL Father and Son, Ahayah and Yasha.